NOTE: Due to winter weather, the Portrait Gallery will close at 5:30 p.m. today and delay opening until noon tomorrow, Saturday, Jan. 29.

NOTE: The museum’s official portrait of First Lady Michelle Obama will be off view beginning in May, 2021. Amy Sherald's portrait of Mrs Obama has inspired an unprecedented response from the public, and will be featured in The The Obama Portraits Tour, organized by the National Portrait Gallery. The tour will travel to five cities across the U.S. from June 2021 through May 2022 and is expected to reach millions of people who might not otherwise have an opportunity to view this remarkable painting. 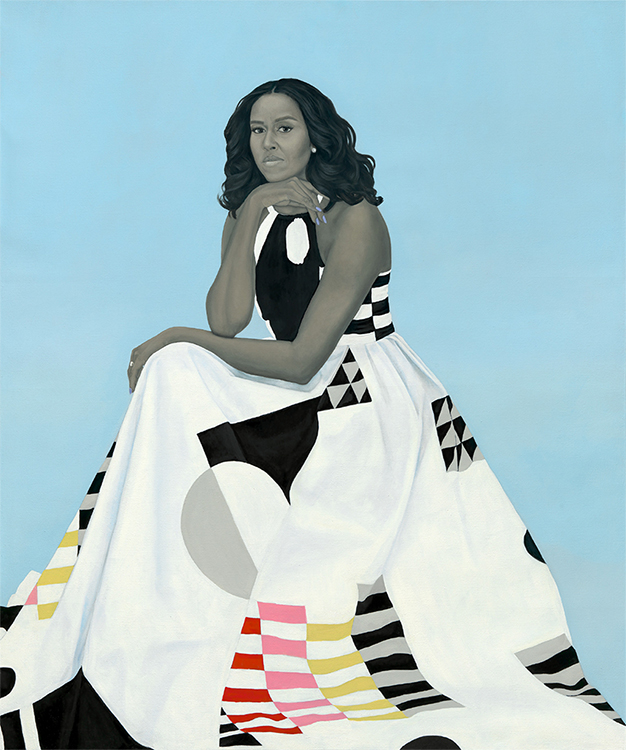 Michelle Obama remembers growing up on the South Side of Chicago and thinking, “being smart is cooler than anything in the world.” After earning degrees from Princeton University and Harvard Law School, she joined Sidley Austin LLP, where she met Barack Obama in 1989. Guided by the desire to improve her community, she left the firm in the mid-1990s to begin a career in public service. She directed community and external affairs for the University of Chicago Medical Center prior to moving to Washington in 2009.

During her husband’s two presidential campaigns, Mrs. Obama delivered poignant speeches that cen-tered on her family’s commitment to serving others and highlighted the importance of her role as a parent. As first lady, she focused on women’s rights, LGBTQ rights, children’s health, and military families.

Mrs. Obama selected Amy Sherald, winner of the 2016 Outwin Boochever Portrait Competition, to create her official portrait for the museum. The Baltimore-based artist considers the former first lady to be someone “women can relate to—no matter what shape, size, race, or color. . . . We see our best selves in her.” Here, she portrays Mrs. Obama as both confident and approachable, in a dress by Michelle Smith’s label Milly.